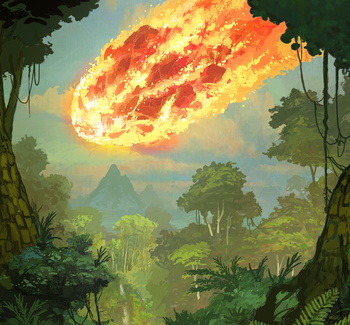 "Huh, the sky is falling."
— General Fletcher, upon a shot from a Meteor Tower killing an alien, Defense Grid: The Awakening
Advertisement:

In Real Life, meteorsnote and the comets/asteroids/meteoroids that become meteors upon entering the atmosphere are mostly balls of ice and/or rock, neither of which is flammable through normal atmospheric combustion. As they enter the atmosphere the heated parts of the now-meteor melts/burns away, leaving a relatively cold meteorite behind if they manage to make it through the atmosphere and impact Earth intact.

But you wouldn't know this from their depictions in media.

Whether because most writers only know of meteors from the dozens of videos of meteors igniting the atmosphere (making it look like the meteor itself is burning), or because it looks cool, meteors in media are depicted as literal burning, or red-hot, boulders that incinerate anything they touch. If the object is burning even before the atmosphere is at all within range, then it's safe to assume that either Space Is Air is in effect as well, or you're dealing with a bonafide Magic Meteor.

Because of this association with fire, if anyone has the ability to call down meteors, it's the person Playing with Fire rather than the one Dishing Out Dirt, sometimes as a Limit Break. In these cases, they're often Slap On The Wrist Nukes. Compare with the standard Fireballs, which are sometimes depicted as small rocks that are on fire. Piss off your Game Master enough and it might be these particular rocks that fall. Contrast Frictionless Reentry; when objects travelling through space can get into the atmosphere without the atmosphere igniting.

Loptr launching a meteor at Bayonetta as an attack.

Loptr launching a meteor at Bayonetta as an attack.