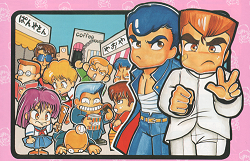 Kunio (in white), Riki (in blue), and all of their friends.
なめんなよ！note "Namen na yo!", lit. "Don't mess with me!"
The series' catchphrase.
Advertisement:

Kunio-kun ("Mr. Kunio") is the name given to the one-time mascot of Technos Japan Corp, a now defunct Japanese video game developer. He is named after Technos's former president, Kunio Taki. Along with his best friend/rival/sidekick Riki, and a variety of other characters cut from the same cloth, Kunio fights lots of guys in the street, competes in various sporting events (which are also pretty violent) and otherwise generally does what your typical Japanese high school student does.

Though the Kunio-kun series was successful in Japan, it was never constantly released (or consistently localized) abroad; although at one time there were plans to localize more stateside under the Crash 'n The Boys label, it seems to have finally settled on the River City label. In the rare case that games from the series did get released abroad, though, the series was generally beloved — if not exactly recognized. See, since there were never any ongoing plans to release the whole series outside Japan, the various games that did make it were localized in almost as many different ways as there were different games. The first Kunio game, Nekketsu Kōha Kunio Kun (roughly translated, "Hot-Blooded Tough Guy Mr. Kunio") got renamed Renegade and a heavy graphics alteration for its American release, although Kunio himself got a relatively accurate name, "Mr. K." However, the most notable game to make it to America is River City Ransom, known as Downtown Nekketsu Monogatari in Japan and Street Gangs in Europe, in which Kunio is renamed Alex, Riki is Ryan, and everyone else is renamed, as well. Other American releases were Crash 'n' the Boys: Street Challenge (Bikkuri Nekketsu Shin Kiroku! Harukanaru Kin Medal), where Kunio is the titular Crash, and Super Dodge Ball (Nekketsu Koukou dodgeball-bu) and Nintendo World Cup (Nekketsu Koukou Dodgeball-bu Soccer-hen), in which most evidence of a clear protagonist was lost. Another thing American players largely missed out on was that many of the Famicom games supported up to four players, thanks to an adapter that was incompatible with the NES (Nintendo World Cup was the only localized Kunio game to support the equivalent NES peripheral). Nonetheless, the series' wacky appeal crossed to America very much intact.

Sadly, Technos went bankrupt in 1996, and it appeared for a while that Kunio and his friends would be no more. Appearances can be deceiving; however, and in Kunio's case they fortunately were. Thanks in part to the cult following (though nothing larger) the series had gained in America, fond memories of the series persisted, and it helped that River City Ransom and Street Challenge both had endings that hinted sequels would come. As the internet became more common and more things that had never been released outside Japan became visible to American audiences, it was discovered that there were indeed many sequels. Kunio fandom swelled online, with many of the Japan-only games being hacked and translated into English, and soon a small but very thorough attempt at producing fangames blossomed.

Though all of this online effort was still pretty subtle in real-world terms, it presumably ignited a spark among former Technos employees, prompting their new company, Million, to purchase the rights to the Kunio series and re-release many of the games, first for the Game Boy Advance, and then on the Wii Virtual Console. Eventually, Million began making new Kunio games, although thus far they've been essentially retreads of older ones. But the series still seems to be getting healthier and healthier. A Wii game had been rumored

and an MMORPG known as Kunio Online: Yamada's Revenge was planned to come out soon, but they were said to be put on hold and are likely canceled. Soon, new entries in the series were all coming out in America, again under the River City name, although now the characters have their original Japanese names. A 25th Anniversary Special was released on December 16, 2011 on the Nintendo 3DS in Japan. An offical sequel of River City Ransom, titled River City Ransom: Underground has been released in 2017 by Canadian indie developer Conatus Creative, with series creator Yoshihisa Kishimoto as a creative consultant on the project.

The franchise was later bought, alongside a few other former Technos properties, by Arc System Works. Their first spinoff for the series, co-developed with WayForward Technologies — River City Girls, a Gender Flip featuring Kunio and Riki's girlfriends Misako and Kyoko as the protagonists — dropped in September 2019. This was followed up by the announcement of Stay Cool, Kobayashi-san!: A River City Ransom Story, focusing on the titular member of the Four Heavenly Kings. The new management also brought River City as a consistent series banner for the western releases to run under, though the earlier releases still keep their old names. This was reflected in Super Smash Bros. Ultimate, which added Kunio, Riki, Goda, and the Dragon Twins as spirits in January 2020 under the "River City" label outside Japan.

In 1991, a manga titled Ore wa Otoko Da! Kunio-kun was made. The manga was based on the games, but with a Denser and Wackier twist.

The Kunio-kun series contains examples of: