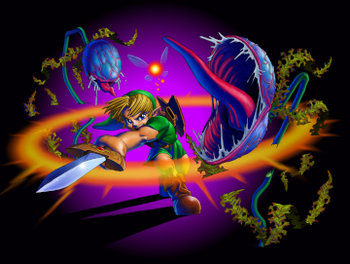 When fighting enemies who like to gang up on you, it helps to have a powerful attack that hits on all sides to make cheeky enemies (especially Personal Space Invaders) give you a little more breathing room. Enter the Spin Attack, a move that consists of spinning around like a maniac to create an "Instant Death" Radius around the user.

In an actual swordfight turning your back to someone will leave you vulnerable to attack, so most characters who do this justify it by spinning fast enough that their body becomes a blur and no side is left open long enough for enemies to take advantage. The move however, may need to be charged up before use and/or leave its user vulnerable afterwards as a Necessary Drawback to discourage the technique from being used continuously.

A similar technique is the Death Blossom, which uses ranged weaponry like a gun firing a spray of projectiles in all directions. Typically shows up in various Asteroids-clones (and in The Last Starfighter of course) as a screen-clearing attack in lieu of the simpler Smart Bomb.

A Super-Trope to Rolling Attack, Roundhouse Kick, Hurricane Kick. For an alternative way to hit targets behind your back, see Dangerous Backswing.

The Pokey spins in an attempt to suck in Mario.

The Pokey spins in an attempt to suck in Mario.