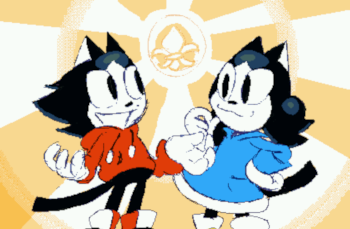 Kyle on the left, Lucy on the right.
Advertisement:

One evening while out stargazing, Kyle Kitcat and Lucy Lovecat stumble upon a magical doorway. Reaching just a little too far, Kyle and Lucy fall into the portal and find themselves in the realm known as Sunova.

In Sunova, shooting stars are blessed by the ruler of the land, "Queen Theresa", granting the wishes of those who wish upon them. Stars that are not wished upon fall to the surface, becoming "Mystical Orbs", gemstones of pure, magical energy. Seeing no alternative, Kyle and Lucy decide to search for Mystical Orbs to wish themselves back home. Unbeknownst to the two young felines, however, is that they are not the only ones searching for Mystical Orbs.

, which can be downloaded here

At SAGE 2019, a three-stage prequel mini-game was released, titled Sondro Gomez: A Wonderworld Story. It centers around Sondro Gomez — a resident of Sunova who longs to leave his homeland to pursue his dream of becoming a musician — collecting Mystic Orbs in order to pay off his debt to a mysterious being called "The Realtor". Unlike Kyle & Lucy, which is a speed-based platformer in the vein of the classic Sonic the Hedgehog games, Sondro Gomez is an action-platformer in the vein of the classic Castlevania games. It can be downloaded for free here