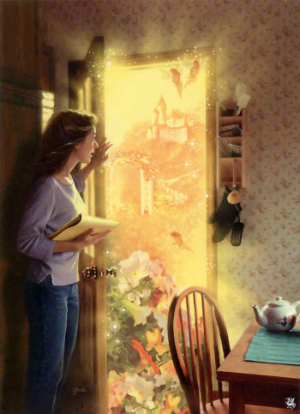 It's all ooohs and aaahs until you get lost. And those aren't insects.
"Behold! I have emerged from the place of spells and fairies."
— Bender. Futurama, "A Pharaoh To Remember"
Advertisement:

Super-Trope to Land of Faerie. Contrast this with Constructed World which does not have visitors or a gateway from our world. See also Trapped in Another World. And if the travelers do return to the everyday world, they or the reader may very likely end up with a bad case of So What Do We Do Now?.