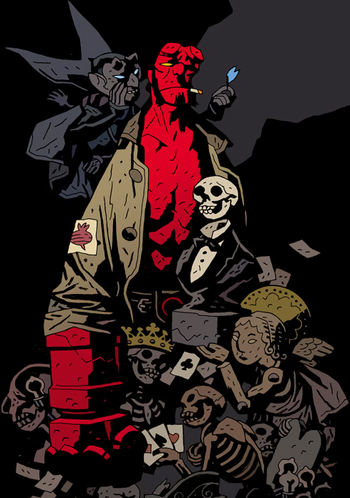 In the final days of World War II, the Nazis, through the assistance of Grigori Rasputin, attempted to bring about "Project Ragna Rok" on a small island off the coast of Scotland in an attempt to salvage the war effort for the Third Reich. A group of Allied occultists and soldiers were on hand to witness the event, and found the fruits of Rasputin's labors: An infant demon, quickly nicknamed "Hellboy".

Instead of being killed because, well, he's a demon, Hellboy is whisked away by the United States and raised under the auspices of the Bureau of Paranormal Research and Defense, a government organization devoted to… well, Exactly What It Says on the Tin. Over the years, Hellboy becomes one of the B.P.R.D.'s top paranormal investigators and forms a deep relationship with his colleagues, who include:

Following several weird revelations and a nasty bit of disagreement with the leadership, Hellboy quits the B.P.R.D. and begins Walking the Earth searching for answers about his past and the real reason why Rasputin summoned him all those years ago…

The first spinoff series, B.P.R.D., details the adventures of the organization in Hellboy's absence. New members are recruited, including:

These members of the B.P.R.D. must confront their own pasts, skeletons from the Bureau's own closet and the escalating threat of lingering horrors from pre-human history. This series is almost entirely written by John Arcudi, and had three series dedicated to the origins of the BPRD, 1946, 1947 and 1948.

The success of BPRD and the increasing scope of the story led to further ongoing spinoffs:

And finally, there are some that are (so far) intended to remain standalone stories.

There was also two role-playing games - the first using the GURPS rules from Steve Jackson Games, the second using the D&D 5E ruleset.

B.P.R.D. has its own page. Please put tropes for that comic and its spinoffs on that page.

And there you go.