Literature / The Last of the Really Great Whangdoodles 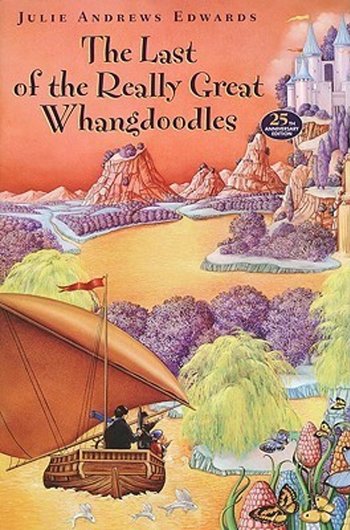 The Last of the Really Great Whangdoodles is a children's novel by Julie Edwards, a.k.a. Julie Andrews.
Advertisement:

Three siblings, Ben, Tom, and Lindy Potter, meet Professor Savant while visiting the zoo one rainy day. On Halloween, Lindy is the only brave one to knock on the spookiest house on the block — which turns out to be the home of Professor Savant. After a second meeting, they begin spending time at the Professor's house, where he introduces them to games of concentration and observation. He reveals that there is a magic land called Whangdoodleland that can only be reached through the imagination, and that he is training them to accompany him there.

Whangdoodleland is the home of the last Whangdoodle that lived in the world. Once the Whangdoodle, and other creatures that are now considered imaginary, lived in our world. However, fearing that people were losing their imaginations, the Whangdoodle created a magic and peaceful world over which he reigns. The professor and the children explore this world.

Each time the children return, they venture farther and farther into Whangdoodleland, intending to reach the palace where the Last Whangdoodle resides. However, the Whangdoodle's Prime Minister, the "Oily Prock", does not want them to disturb His Highness, and sets up a number of traps, both in Whangdoodleland and the real world to prevent this meeting. He enlists the marvelous and funny creatures of the land in his effort, including the High Behind Splintercat, the Sidewinders, the Oinck, the Gazooks, the Tree Squeaks, and the Swamp Gaboons. The children use their imaginations, intelligence, and the friendship of another denizen, the Whiffle Bird, to outwit trap after trap, but can they reach the Whangdoodle's castle?