Literature / The Marvellous Land of Snergs 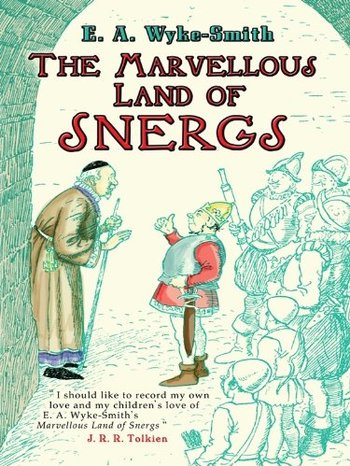 "I should like to record my own love and my children's love of E. A. Wyke-Smith's Marvellous Land of Snergs."
— J. R. R. Tolkien
Advertisement:

The Marvellous Land of Snergs is a children's British fantasy book written by Edward Augustine Wyke-Smith (pen name, E. A. Wyke Smith). The original edition was published in UK in 1927 and illustrated by George Morrow.

The two main characters, Joe and Sylvia live in Miss Watkins' colony/shelter for abandoned or mistreated children, located on a remote island hidden somewhere in the world. In addition to Miss Watkins, her employees and the rescued children, the island is inhabited by strange fantasy creatures and is home to the Snergs, a tribe of short, party-loving people.

The action starts when Joe is grounded after playing a bad prank. Sylvia breaks Joe out of confinement, and both children decide to run off and visit the Land of Snergs. Unfortunately, Joe and Sylvia get lost in the woods, but they are found by Gorbo, who takes them to the capital city of the Snergs.

And that is only the beginning of their adventure.

Given the similarities between Snergs and Hobbits, it is speculated the book provided inspiration for The Hobbit, a thesis supported for J. R. R. Tolkien's own statements of loving the book.

Tropes founds in this work: