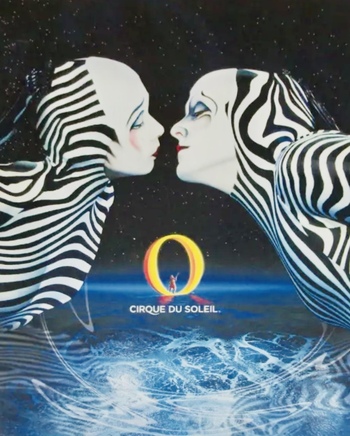 "O" (it is common to include quotation marks due to its One-Letter Title) is Cirque du Soleil's eleventh show, which opened at the Bellagio Hotel and Casino in Las Vegas, Nevada in October 1998.

The setting is a baroque opera house, carrying on from the posh theme of its host hotel, with a red velvet curtain and soaring ceiling. As the lights dim, an "audience member" (Philemon) is surprised twice over — first by a nymph-like woman who descends from the top of the dome and drops a red scarf to him, and second by someone beckoning to him from behind the curtain. Curious, he goes up to see what the stranger wants. Said stranger (Le Vieux) turns out to be the theater's guardian, and Philemon has just become the leading man in a unique adventure...

"O" is the phonetic pronounciation of the French word for water (eau); it also represents the number zero and infinity. This theater is one representing all theater, and based around water. What lies beyond that curtain is a gigantic pool. While it can (and does) switch to a conventional stage in seconds, depending on the needs of the moment, it is usually in its watery form. It is here that a colorful array of acrobatics unfold, from water ballet to high diving to fire spinning to the travails of two clowns on a shack adrift at sea. And in these acts unfold tales of love, disappointment, youth, death, joy, and strife on top of Philemon and Le Vieux's dual pursuit of the beautiful Aurora.

Wildly ambitious and extravagant, the show opened to glowing reviews and caused a sensation in Vegas, setting a high bar for subsequent theatrical spectacles worldwide (including Cirque's own) to clear.

Footage and characters from this show have appeared in the making-of documentary Flow (available in Region 1 via Cirque's gift shops and online boutique), the Widget Series Solstrom, and the 2012 3-D movie, Cirque du Soleil: Worlds Away. It was also filmed in its entirety for broadcast on the European cable network ARTE in 2017, but this has not received a home media release.