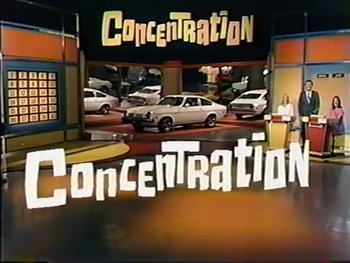 Behind these numbers is a rebus puzzle! Can you solve it?
Advertisement:

NBC's longest-running daytime Game Show was created in the late 1950s by Jack Barry, Dan Enright, Robert Noah and Buddy Piper, just before the quiz scandals broke. The Concentration format was simple: Two contestants took turns matching prizes on a board of 30 numbered panels, hoping to solve the underlying rebus puzzle. It ran almost 15 years, from August 25, 1958, to March 23, 1973.

Jack Barry was the original producer of Concentration, as well as 21 and Tic-Tac-Dough. Shortly into the run, NBC took over production of Concentration and canned Twenty-One. Hugh Downs, most notable to news fans as a Today Show anchor and to late night fans as Jack Paar's sidekick/announcer on The Tonight Show, hosted from 1958 to 1969. Barry himself helmed a four-episode nighttime version, which replaced the aforementioned Twenty-One. A second nighttime edition, this time in color, aired for six months in 1961.

Concentration was the last NBC show to go from monochrome to color, doing so in November 1966. Producer Norm Blumenthal agreed to the transition only on the condition that his puzzles remain in two-tone white against a gray background, since he felt that color puzzles would give away clues too readily.

By December 1968, Downs was feeling stretched due to his various NBC commitments and chose to remain on Today. Bob Clayton, then the announcer, began hosting on January 6, 1969, but was replaced by Ed McMahon from March to September. Clayton, who returned to the announcing booth during this time, became host again and remained through the end in 1973.

Five months after the show left NBC daytime, Jim Victory Television launched a five-a-week syndicated series (subcontracted to Goodson-Todman to produce) with Jack Narz as host. Proving that Concentration still had an audience, this version ran on mostly NBC affiliates and ended in 1978. Amongst other changes, a bonus game was instituted (the "Double Play" round) for the first time.

In 1985, Goodson taped a pilot week of shows hosted by Orson Bean. Certain aspects of these (but not the abysmal "match related words" concept) were held over for Classic Concentration (hosted by Alex Trebek), which ran on NBC from 1987 to 1991. The network planned to bring the show back in 1993, possibly as an hour-long version (a partial runthrough of this, Classic Concentration II, surfaced in 2014), but this failed.

The format was exported to ITV and to Australia's Seven and Nine networks. Foreign-language versions included Concéntrese in Colombia and Gewußt-Wo… in Germany.