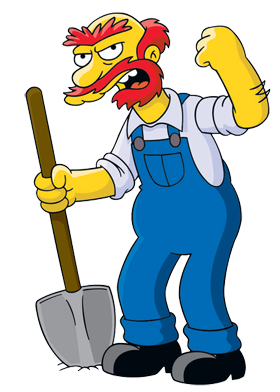 "Willie hears ya, Willie don't care!"
"I aM ToRgo. I tAkE CAre of ThE plAce whiLe the MasTeR is aWay."
— Torgo, Manos: The Hands of Fate
Advertisement:

He — and it is always he — is a caretaker, janitor, groundskeeper, or better yet, gravekeeper, who is crusty, uncouth, or otherwise lacking in people skills.

Popular in horror, because there's a lot of overlap with The Igor, Sycophantic Servant, and The Renfield.

Then, may also be the Old Retainer, in which case he is often the Jerk with a Heart of Gold. Expect the children of the house to love him despite his rough exterior.