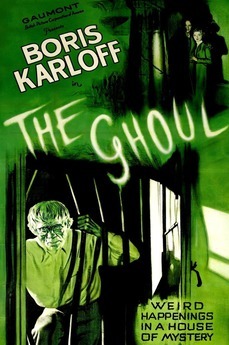 Egyptologist and professor Henry Morlant (Karloff) thinks an ancient jewel will give him powers of rejuvenation if it is offered up to the god Anubis. But when Morlant dies, his assistant Laing (Thesiger) steals the jewel. While a gaggle of interlopers, including a disreputable lawyer (Hardwicke) and a fake vicar (Richardson), descend on the professor's manor to steal the jewel for themselves, Morlant returns from the dead to punish everyone who has betrayed him.

Tropes used in The Ghoul include: