Film / Gabriel Over the White House 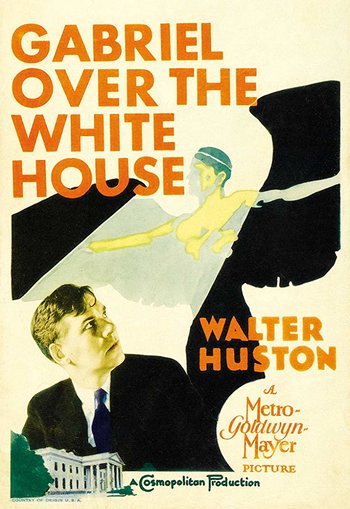 "[I]f what I plan to do for the people makes me a dictator, then it is a dictatorship based on Jefferson's definition of Democracy! A Government of the greatest good for the greatest number of people!!"
— President Judd Hammond
Advertisement:

Newly-elected U.S. President Judson Hammond (Huston) is a political hack who's far more interested in cavorting with his mistress Pendola Molloy (Karen Morley) than tackling the crime problem, or ending The Great Depression, or doing anything else to fix the terrible problems plaguing America in the early 1930s. Then one day he is injured in an auto accident and goes into a coma. When he wakes up, Hammond is a completely different person, a crusader who has a whole slew of radical new ideas to get America back on its feet. Radical new ideas that mostly involve a populist dictatorship.

One of the most unintentionally scary films ever, and likely more influential at the time than we realize...