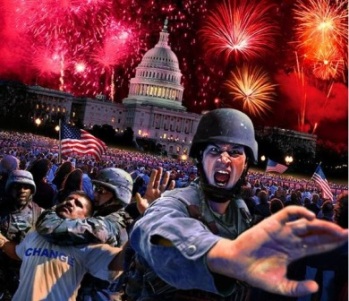 20 Minutes into the Future, or perhaps an Alternate History gone wrong, the United States is no longer the shining beacon of democracy that it once was. Perhaps civil war and/or an invasion has turned the country into The Dictatorship, corporate influence has undermined the democratic ideals the nation once held, a theocratic religious movement has taken control of the government, or democracy has been suspended in order to fight off external or internal threats, real and/or imagined. Whatever the reason, the nation is only a democracy in name, or sometimes, not even that if the regime is painfully honest.

Expect to see FEMA, DHS agents, cops that are always clad in riot gear, or even the military patrolling the streets, harassing innocent citizens for arbitrary crimes or by virtue of simply "being there." Civil rights have been suspended for the "greater good," and political dissidents are shipped off to concentration camps or made to "quietly disappear", never to be seen again.

A La Résistance of sorts will be featured usually, made up of fed-up citizens, and sometimes former or dissenting military or police personnel that are following their oath to defend the Constitution against all enemies, foreign and domestic. Regardless, they'll be dismissed as terrorists by the American government, and will usually be used to justify the oppression.

How they are portrayed depends on the work. Some may have them as plucky heroes that still believe in idealistic American beliefs and are willing to die to restore them, whereas if the scale goes further towards cynicism, may have them portrayed as well meaning rebels that commit some atrocities to fight against the system, or even Right Wing Militia Fanatics (who turned out to be Properly Paranoid after all) who are little better than the system they are fighting, and often become much worse.

In a political work that is left-leaning, expect to see this trope overlap with The Boorish version of Eagleland, an America where separation of church and state no longer exists and in which the government is in the pockets of crooked businessmen and warmongers - or a combination of both, all sponsored by the brutal and crooked president. Right-leaning works will favor a Commie Land America, with shades of either old-style Stalinism or '60s radicalism depending on the period the work came from; or since the end of the Cold War, radical Islamists imposing Sharia law, in which the separation of church and state no longer exists. Libertarian and centrist works will often take elements of both of these portrayals.

Can overlap with Fallen States of America, if the nation has become a dictatorship as a result of the fallen status, or is one of the reasons behind it, although it is possible for the US to still be a superpower, or at least still be a "first-world nation". Divided States of America or a Second American Civil War is also a possible trope as well, as the remaining US government may be trying to keep what is left of the nation together by any means possible, if the oppressive was not the cause of the Civil War to begin with. (Of course, The revolution may not be civilized as well.)

Invaded States of America can count too when the nation goes dictatorial to protect against the enemy, or if the invaded sections are under a restrictive foreign government. Also see Evil States of America, which is where the United States are the badguys, oppressive or not.

Basically Day of the Jackboot with a specifically American focus.

Sub-Trope of Different States of America.

No Real Life Examples past the Civil Rights Movement of the 1960s. Needless to say, many ideologues and conspiracy theorists on all extremes of the political spectrum believe this trope to be Truth in Television, some tropers and readers could probably write an essay complete with citations about how there are at least some elements that are truthful, let's just leave it at that.