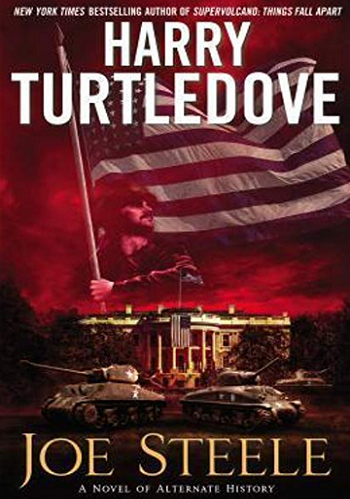 "Stalin was a Democrat."
—Janis Ian, "God & The FBI"
Advertisement:

Joe Steele is an Alternate History Short Story by Harry Turtledove. It was published in Stars: Original Stories Based on the Songs of Janis Ian in 2003. Essentially it is the answer to the question: "What if Josef Stalin were born in the USA?" Why he'd run for President of course! Armed with his Four Year Plan, Joe Steele sets off to battle his chief political opponent Franklin D. Roosevelt, the Capitalist decadence that brought on the Depression, The US Supreme Court, Adolf Hitler, Trotsky, and the very notion of term limits.

Turtledove later expanded the short story into a novel, published in April 2015.