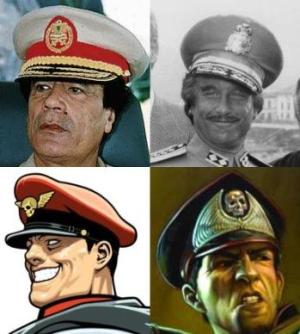 Clockwise from top left: Muammar Gaddafi, Alphonse Simms, Ibram Gaunt, and M. Bison.
"It isn't the scarlet sash and the fancy hat that makes you a commissar, it's the way you wear them."
— Ciaphas Cain note  HERO OF THE IMPERIUM
Advertisement:

A subtrope of Bling of War. A large, high peaked cap

similar to those worn by Banana Republic dictators. The trope namer is Warhammer 40,000, with Commissars wearing such caps.note This is itself a nod to the similarly totalitarian Soviet Union, in which pretty much everyone, even primary school children, was issued a peaked cap at some point, especially the political commissars. In Russia, the peaked cap (kartuz) was actually part of national dress and many civilians wore it prior to 1930s. This headgear surely makes the wearer look badass in an authoritarian sense of the word. Sometimes decorated with elaborate silver or gold designs on the visor and/or the front of the crown, nicknamed "scrambled eggs" by military folks; the stereotypical Banana Republic leader's cap has so much of these that you can barely see the color of the actual cap underneath.

Sometimes, especially if the cap in question is black with silver piping, it's Putting on the Reich, as S.S. Nazi officers were also fond of them.