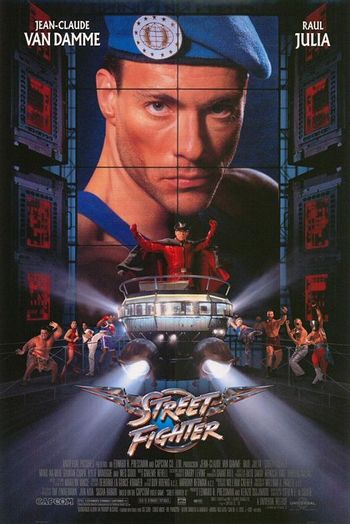 "OF COURSE!"
"Van Damme's motivating speech is rightly famous, just as the Hindenburg is a well-known aircraft."
— Cracked on

In the remote southeast Asian country of Shadaloo, the power mad dictator General M. Bison (Raúl Juliá) is trying to usurp power and take over first the country, then the world. OF COURSE!!! To fund his megalomaniacal schemes, he's captured several dozen relief workers, who totally are not from the Red Cross, and is holding them hostage for the sum of twenty billion US dollars. It is up to the Allied Nation forces, led by Colonel William F. Guile (Jean-Claude Van Damme), to get in there, take out Bison, and rescue the hostages. And they have three days to do so before hostages start dying. His immediate subordinates include Lieutenant Cammy (Kylie Minogue) and Sergeant T. Hawk (Gregg Rainwater).

Reasons for the story not matching up with the games are plentiful, including difficulty with the myriad of characters and the story itself being very vague at that point, so the writers had to make do with what they had. Adding to this was Executive Meddling from Capcom, who wanted every character possible to be in the movie.

The film is notable for the late Raúl Juliá's portrayal of M. Bison, which would be his last major role. He took the job knowing he was terminally ill with stomach cancer and let his children pick out which movie would be his last, and apparently wanted to go out on a loud note for his final performance.

Not to be confused with Sonny Chiba's The Street Fighter.

For you, the day you discovered TV Tropes was the most important day of your life. But for me, it was Tuesday.
Feedback