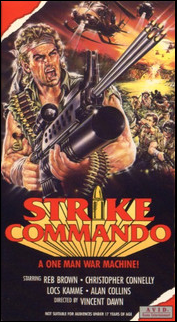 In it he plays Michael Ransom, one of the eponymous strike commandos sent into Vietnam to blow up a base. While the mission is successful, Ransom's teammates are killed and he is knocked unconscious into a river. He comes to at a village where the people have saved him and nursed him back to health, eventually befriending them. In return he guides them to safety before eventually being picked up by his unit. He's soon sent back to find out if any Russian soldiers are snooping around the area, and returns to the village that saved him to find everyone slaughtered by said Russians. To say the very least, It's Personal and major ass kicking ensues.

Gained a sequel, but it didn't star Reb.