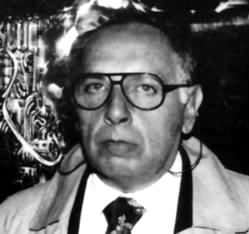 Bruno Mattei (30 July 1931 – 21 May 2007) was a prolific Italian film director, screenwriter, and editor who dabbled mainly in exploitation films. Mattei's films often followed popular genre trends of the era, and he worked under various pseudonyms, the most prominent being "Vincent Dawn".

Think of him as being a bit like an Italian version of Roger Corman or Jess Franco.

Works by Bruno Mattei with pages on TV Tropes include: