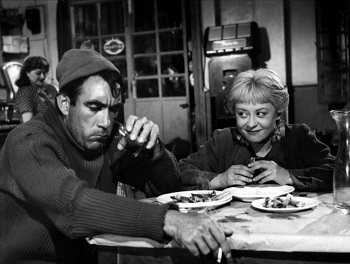 Gelsomina (Masina) is a slow-witted peasant girl whose sister Rosa left some time in the backstory, to work with strongman Zampanò (Quinn) as part of his traveling strongman act. The film begins with Zampanò's return to Gelsomina's home following the death of Rosa. Gelsomina's mother literally sells her to Zampanò as a replacement. Gelsomina is then left in a grim existence with the brutish, physically abusive Zampanò, working as the clown in Zampanò's act. Her only friend is "The Fool", a clown and high-wire performer who delights in antagonizing the humorless, thuggish Zampanò.

La Strada won the first competitive Academy Award for Best Foreign Language Film (prior awards had been honorary). Fellini described it as "my most representative film".