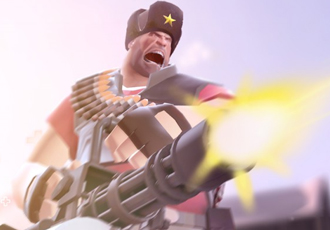 "BzZZZzzZZZzz RARARARA BWRRRRRRRRR! AHAHAHAHA!"
"I hear Tess yelling something in Andorian but I can’t tell what over the racket from her weapon."
— Captain Kanril Eleya, Bait and Switch

There's something about the roar of a machine gun that makes the wielder want to roar along with it.

The character could be letting off some anger, or despair, or just get caught up in the adrenaline of the moment.

Can overlap with Firing in the Air a Lot or "Shut Up!" Gunshot.