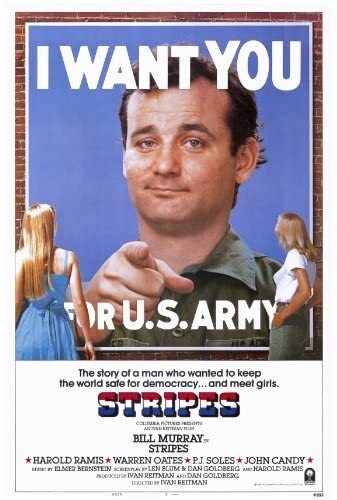 That's the fact, Jack!
"We're all very, very different, but there is one thing that we all have in common: we were all stupid enough to enlist in the Army!"
— John Winger
Advertisement:

John Winger (Murray) is a slacker who convinces his friend Russell Ziskey (Ramis) to join the U.S. Army with him. The two of them have a miserable time in basic training, but eventually their drill instructor, Sgt. Hulka (Oates), gets injured in a training exercise and they have to finish the training on their own. The night before graduation day they stay up all night, show up late for the parade, and put on one hell of a show for the generals. In the end, they are assigned to guard the new EM-50 urban assault vehicle in Italy.

While John and Russell are guarding it, they decide to "borrow" it and go for a joyride to Austria. The rest of their squad comes after them, thinking that they're communist spies, but they take a wrong turn and get captured by the Soviets in Czechoslovakia. Winger and Russell come back to save their squad. When they come back to the states, somehow they all end up getting medals.

The movie was well-liked by critics, with an 88% fresh rating on Rotten Tomatoes. It was also fairly successful financially, grossing $85 million domestically on a $10 million budget. Elmer Bernstein composed the score.