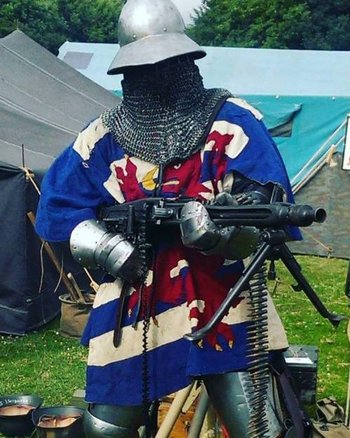 Parry this, you filthy casual!note And yes, knights did use guns - just not ones from 1942.
The practice of giving inappropriate firearms to characters or factions in a TV show or movie. They're generally inappropriate because they are either outdated (like modern American soldiers with Tommy guns), too modern for the setting (like a cop in 1965 having a Glock), or because the group in question wouldn't have access to them (like Soviet soldiers wielding Uzis).
Advertisement:

Needless to say, it isn't restricted to guns, but they are always the first and most notable victim. Which is strange, as it's generally a lot easier to get a few MP-40s than to arrange for a Tiger tank to show up in your production.

One reason this can happen (especially for things more expensive than guns) is that the "right" weapon may not be available, and an incorrect version easier to come by than it would be to make a replica. For example, Chinese AK clones commonly stand in for the real thing in American movies made during the Cold War. An extreme case would be armoured vehicles; there is only one World War II-vintage Tiger tank that still runs in the entire world and leasing a running mock-up from a private collection would be far more expensive than simply using some other tank and hoping the audience doesn't figure it out. This goes even more for ships; before modern CGI, movies were often forced to either use contemporary warships (even with a stratospheric budget, Pearl Harbor's Japanese carrier set was built on the deck of a modern carrier, made obvious by the visible steam catapult runs) or unconvincing models.

Anime and video games have no similar excuse, since they can by definition include anything the artists can draw or render, no matter how hard it might be to acquire a real example. One of the major reasons (aside from Rule of Cool and a desire to include the creator's favorite guns no matter how little sense it makes) is that the designers often are not "gun people" and just copy what they saw in movies, or - in an effort to make sure what they do include is modeled as accurately as possible - are limited by what props they can get their hands on to use as a reference, often having to go off of more common stand-ins or airsoft guns.

While guns are a fairly mature technology with most new designs being more ergonomic than mechanically different (which seems to boil down to more plastic, short stroke gas piston, and different ergonomics than any actual innovations), some shows will push this and it gets unrealistic when a gun is still in use in an entirely different universe, 1,000,000,000 years from now, or 100 years before it was designed.

Alternative Title(s): I Know That Gun