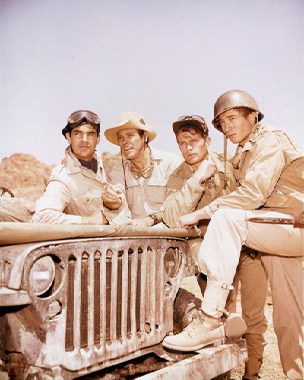 The In Color Raid! Left to right: Moffitt, Troy, Hitchcock and Pettigrew.
"Shall we spread a little alarm and despondency?"
—Sgt. Jack Moffitt in "The Kingdom Come Raid"
Advertisement:

The Rat Patrol is a World War II Action/Adventure Series from The '60s. It follows the Shoot 'em Up exploits of a four-man band of Allied soldiers as they wreak havoc on the Afrika Korps' supplies and missions. Most episodes are set in and around the deserts of Libya, although the heroes are sometimes sent on commando raids in less hostile environments.

The show ran for two seasons (1966-68) and 58 episodes on ABC and developed a cult following that has lasted to this day. Fondly remembered by fans for its leapin’ jeeps, action-oriented story telling, and epic explosions.