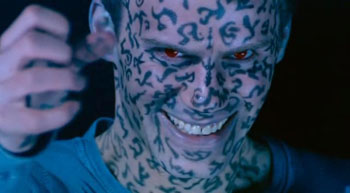 Here's hopin' those marks aren't Sharpie...
"He is awake. And you will worship him."
Advertisement:

The one with Cthulhu aliens electrocuting people and tons of devilry.

Rose and the Doctor find themselves in a space base, but the TARDIS seemed strangely reluctant to materialise (bad sign number one). Rose points out that they can hop back in and go somewhere else if they think there's going to be trouble, but neither of them can keep a straight face at the idea. They venture inwards and find a wall with "Welcome to Hell" written on it (bad sign number two), along with a series of symbols that not even the TARDIS can translate, which means the language must be impossibly old (bad sign number three). To top it all off, Rose's super work-anywhere mobile phone has no signal (bad sign number four).

They're soon introduced to the Ood ("We must feed... we must feed... you, if you are hungry"), a "slave race" linked by a telepathic field who communicate with others via orb-shaped translators. Next in line are the base's human crew, who are suitably astonished at these two strangers appearing out of nowhere and having no idea where they are. It turns out the planetoid they're on is far too close to a black hole to still be intact: something at its center is creating a gravity field (complete with a funnel for the ship to fly down) which holds it in place, and the crew are drilling to the core to find out what. The Doctor is delighted at the idea of a bunch of humans choosing to live in such a desolate place just "because it was there" and promptly hugs the ship's captain. However, the place also turns out to have massive earthquakes... one of which has just sent a chunk of the base's storage space falling into a chasm, including the TARDIS.

The Doctor and Rose deal with the idea of being trapped in that time and place forever. They discuss mortgages and whether or not they'd live together. Suddenly, they and everyone else start to notice strange glitches with the intercoms and the Ood's translator devices. When they investigate, the Ood's telepathic field goes berserk — they're screaming inside their heads. Or something's screaming at them. Right on cue, they all start chanting ominously in unison.

Toby, the crew's archaeologist, is busy examining some artefacts when he gets singled out for special treatment by a strange, whispery voice.

Toby looks — and sees nothing... until he looks in the mirror. The symbols from the shards he was inspecting have moved onto his skin, and his eyes are bright red. When Trainee Maintenance Scooti Manista questions the computer about an unauthorized opening of the airlock (with no spacesuit being logged out), she's astonished to see Toby walking on the planet's surface unprotected... before he telekinetically shatters the window, pulling her into space. The others find only a shell-shocked Toby and mournfully watch Scooti's corpse drift out of sight.

When the drill finally reaches the planet's core, the Doctor talks his way into being allowed to go down in the capsule along with science officer Ida. They find the ruins of an ancient civilization and an enormous, imposing seal covered with the same markings. Right on cue, it starts to open, as the Ood rise up as the "Legion of the Beast" and the planet starts trembling in its orbit.