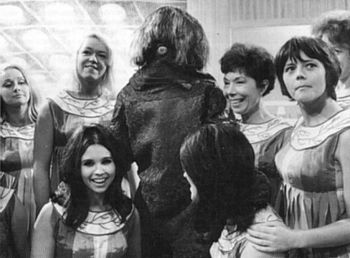 Whoopsy.
"Take them to the security kitchen!"
— Monoid One (spotting a shortcoming in the Ark's design — right next to the laundry brig)
Advertisement:

The one with ping-pong eyeballs.

Written by Paul Ericksonnote His wife Lesley Scott was credited as a co-writer at Erickson's request, but she does not appear to have done any actual work on the script. This four-episode serial first aired from March 5-26, 1966.

The eponymous Ark is a giant spaceship carrying Earth's surviving human, plant and animal life in suspended animation en route to a new planet, Refusis II. A few human guardians and their one-eyed, mop-topped servants the Monoids take care of the ship, but when the travellers arrive a plague quickly spreads. Dodo has a cold, and the common cold was wiped out a long time ago and neither human nor Monoid has any resistance.

The travellers are placed on trial for deliberately spreading the plague, but the Doctor manages to find a cure and they are allowed to leave...

...only to rematerialise on board the Ark as it nears the end of its voyage. Since the plague, the Monoids have grown stronger and it is the humans who are the slave race.

The Monoids plan to colonise Refusis II themselves, but the invisible Refusian natives help the Doctor persuade both races to live in peace.