Monument of Humiliation and Defeat 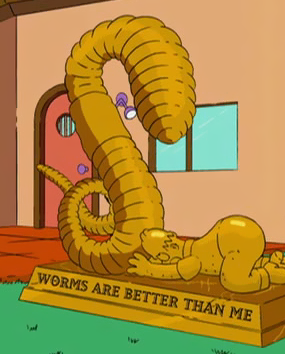 EAT DIRT, CHARACTER WHO WAS ALSO VOICED BY DAN CASTELLANETA!
"The great Atrium seemed darker than Harry remembered it. Previously a golden fountain had filled the center of the hall, casting shimmering spots of light over the polished wooden floor and walls. Now a gigantic statue of black stone dominated the scene. It was rather frightening, this was a sculpture of a witch and a wizard sitting on ornately carved thrones, looking down at the Ministry workers toppling out of fireplaces below them. Engraved in foot-high letters at the base of the statue were the words MAGIC IS MIGHT. ... Harry looked more closely and realised that what he had thought were decoratively carved thrones were actually mounds of carved humans: hundreds and hundreds of naked bodies, men, women, and children, all with rather stupid, ugly faces, twisted and pressed together to support the weight of the handsomely robed wizards."
— Description of the "Magic Is Might" statue" in Harry Potter and the Deathly Hallows
Advertisement:

Humans love winning, and then gloating about it. Whenever we win we need to rub our victory in the loser's face and call him out. From the Crusadesnote turning mosques into churches and vice-versa to the Nazis,note Hitler made it a point to sign France's surrender on the same railroad car the Germans did in the First World War, and then took it back to Germany as a trophy, then blew it up just to make sure France couldn't get it back when Germany was about to lose the war the Spanishnote after the Civil War, Franco built a mausoleum for himself, an abbey and a graveyard with the labour work of the republican soldiers and the Conquistadorsnote after the fall of Tenochtitlan, the conquerors built churches on top of the temples with the very same stones they were built with and even the Olympic Gamesnote after the student protests of 1968, president Gustavo Díaz Ordaz opened up the Olympic Games in Mexico City in the stadium of the university many students came from; history is full of people who just had to do it. So you got a story where the Big Bad has won. His armies swarm the entire country and La Résistance is forced to retreat, flee or go into hiding. That's pretty bad, but the bad guy has yet one last thing to do: ensure his rule. So he makes something to honour his victory: he sends his people to make him a giant statue of Our Glorious Leader over the remains of the rebel base, renames the former rebel city stronghold in his name, sets a yearly military Victory Parade on V-Day, or all of them (and/or many many more). His purpose is both to exalt his ego and gloat to ensure no one dares question his authority by taking a former symbol of La Résistance and using it against them. If there are still members of La Résistance hiding around somewhere, the monuments serve to mock them and remind them of their defeat, lower their morale and prevent them from rising against the Leader again. Forcing the defeated enemies to Kneel Before Zod is often part of it as well. Usually invoked in Dystopian worlds.

Compare to Our Founder. Medal of Dishonor is related, but more personal. When the bad guy simply puts his face on an existing monument, it is a Rushmore Refacement. If the bad guy replaces the city's name for a mere number it's Airstrip One. See also Humiliation Conga, which is about the villain suffering from any such incident, to the joy of the audience and usually the hero. Subtrope of Evil Gloating.