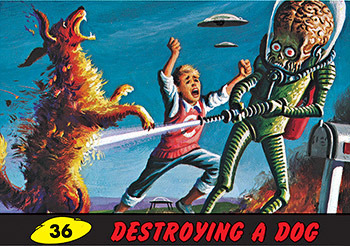 What a dick.
"They'll rip your head off just for fun
They'll paralyze your mind
They're wearin' out their welcome
I don't think I like their kind
They'll suck your brain out through a straw
You just can't trust those guys
So hide the children, lock the doors
And always watch the sky!"
— "Weird Al" Yankovic, "Slime Creatures from Outer Space"
Advertisement:

When man looks up at the stars, the sense of wonder, and emptiness, can be as overwhelming as the questions they inspire. Is there life out there? Is it intelligent? Are they friendly? In fiction, the short answers are: "Yes", "Yes" and "Hell no!" Why? Because Aliens Are Bastards.

In Speculative Fiction stories dealing with the extraterrestrial and otherworldly, the beings from beyond the veil are rarely friendly, and if they are it's usually a pretense so they can eat us or make us mommies less than consensually. The reason is that it makes good drama, it exploits humanity's latent fear of the unknown with implacable and indecipherable menaces. Traditionally this trope uses aliens not as characters but as forces of nature. They will be the Monster of the Week for the heroes to fight, a terrifying and nigh-unstoppable foe with little to no motivation other than violence for its own sake.

This type of alien bastard is usually very visually distinct from "good" aliens (who tend to be Green Skinned Space Babes or Human Aliens). They will be ugly, obviously inhuman and rarely humanoid. Of course, they won't be friendly, do not understand love, want to steal our women, natural resources and possibly leave nothing behind of the planet itself. Despite having the technology needed for space travel, they will make no attempt to communicate or explain their actions and seem to have targeted us for no good or readily apparent reason.

This is aliens being Always Chaotic Evil. If they are Precursors, they were either neglectful or are downright abusive.

On a lesser scale, there are, of course, The Greys with the reputed stereotype of mutilating cattle and abducting humans for the sole sake of probing them in the name of Science for their own, vague, nefarious purposes.

When the aliens' motivations for bastardry are placed parallel to humanity's negative traits, revealing the two to be similar, then Humans Are the Real Monsters. Indeed, that trope was originally launched as Humans Are Bastards before it suffered Missing Supertrope Syndrome and got a Trope Transplant.

When the aliens are used as allegories for a certain ideal, organization or country that the writer doesn't like, then they're Scary Dogmatic Aliens. As with the above, the negative traits of the targeted group are almost always excessively exaggerated. Expect the aliens to display traits displayed by said group's Vocal Minority, with the implication being that the entire group is as crazy and violent as the aforementioned minority. The similarities with Jerkass Gods, especially when the aliens are godlike in power, may not be coincidental.

Something of a Discredited Trope, as the depiction of aliens as mindless beasts or imperialist bastards has generally fallen out of use in favor of more civilized beings who can discuss the finer points of philosophy and provide a convenient canvas for the writer to paint his or her message onto. On the other hand, grotesque aliens being monstrous Villains of the week, or simple enemies is still pretty common.

NOTE: This trope does not apply to animalistic aliens without intellect. Violent as they are, they aren't knowingly being bastards. See Non-Malicious Monster.