We Come in Peace  Shoot to Kill 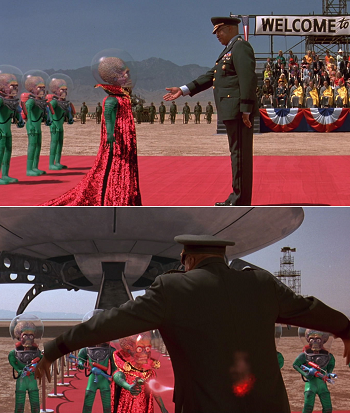 We wanted peace. They wanted war.
Not exactly our best first contact...
"Humans of Earth, I come in peace. You need not fear me; I mean you no harm. However, it is important to note that most of you will not survive the next 24 hours."
— Gallaxhar, Monsters vs. Aliens
Advertisement:

Aliens' First Contact with Earthlings will go one of two ways, usually.

It's a Schrödinger's Gun; mankind is either an aggressive oppressor or clueless victim, and never in the beneficial combination. The trope name comes from the signature line of "Captain Kirk" in the song "Star Trekkin"

by The Firm. (Contrary to popular belief, Kirk never actually said this on the show.)

A subversion of I Come in Peace. Aliens who try this should read How to Invade an Alien Planet.