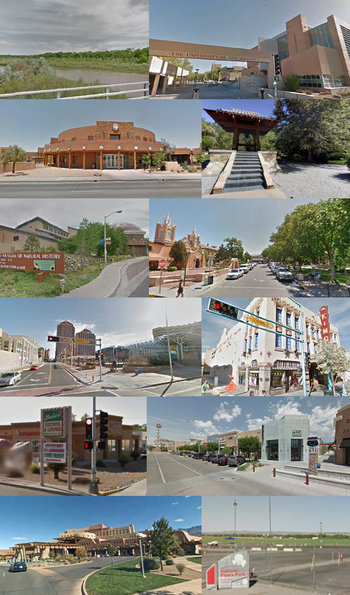 Random spots around Albuquerque, using Google Maps streetview.
"A magical, far away place. Where the sun is always shining, and the air smells like warm root beer, and the towels are oh so fluffy!"
— "Weird Al" Yankovic
Advertisement:

"Albuquerque",note prounounced "AL-buh-ker-kee" known as The Duke City, is the largest city and metropolitan area in New Mexico. Founded as "La Villa de Alburquerque" in 1706, named after the Duke of Alburquerque, the viceroy of New Spain. Best known for quite a few things: being the birthplace of NPH, the home of Heisenberg, the founding location of Microsoft, a magical land where the towels are oh so fluffy, the place for living one's high school experience as a musical, and being where Bugs Bunny should've taken a left turn.

The city is well known for its panoramic vistas; to the east are the large Sandia Mountains, to the west is the West Mesa with its inactive volcanoes, and running north-to-south is the Rio Grande river with its accompanying Bosque forest. Officially called the City of Albuquerque, within Bernalillo County, although the metropolitan area encompasses the counties of Sandoval, Torrance, and Valencia. Also, when taken as a part of the Albuquerque-Santa Fe-Las Vegas Combined Statistical Area it also encompasses Cibola, Los Alamos, Rio Arriba, San Miguel, and Santa Fe counties.

In order of top-to-bottom and left-to-right places in the image include the Rio Grande and Bosque, The University of New Mexico, Indian Pueblo Cultural Center, Sasebo Japanese Garden at the Bio Park's Botanic Garden, Museum of Natural History near the Albuquerque Museum of Art and History with the accompanying Tiquex Tricentennial Park, Albuquerque Old Town with the San Felipe De Neri Church with accompanying town square, Albuquerque Downtown near the Albuquerque Convention Center, The Kimo Theatre, a Blake's Lotaburger near a Sadie's both of which are New Mexican cuisine classics, ABQ Uptown, Sandia Resort and Casino, and the Albuquerque Balloon Fiesta Park.

The city has a large forest surrounding the Rio Grande, a river which flows through the city north-to-south, the forest area is called the Bosque (bose-kay or boss-key). To the east are the Sandia Mountains, and to the west is the West Mesa. While the Albuquerque Metropolitan Area is a large conurbation, directly under Albuquerque proper are:

Travel series that have visited Albuquerque

And in case you were wondering, turning left at Albuquerque will take you to one of the following locations Cucamonga, Pismo Beach, a bull fighting arena in Spain, or either the North or South Pole.