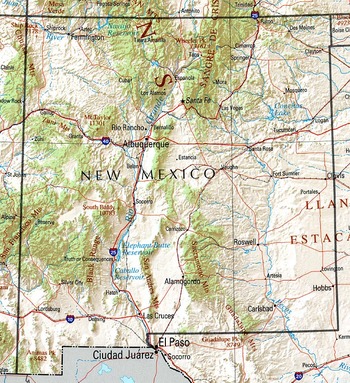 Heeey, there’s a NEW Mexico!
"I enjoy this area, I enjoy the culture of New Mexico, I enjoy the food."
—Bryan Cranston in an interview with PBS

New Mexico, officially the State of New Mexico (or el Estado de Nuevo México in the widely-spoken Spanish), with the nickname The Land of Enchantment. Founded in 1598 as the colony of Santa Fe de Nuevo México, it gained statehood into the United States in 1912. The state is now a part of the Mountain West and American Southwest, and the Four Corners region neighboring Colorado, Arizona, and Utah. It also borders Oklahoma and Texas to the east, and it is one of four states to share its southern border with Mexico, bordering the Mexican states of Chihuahua and Sonora. It is the 5th largest state in the country, although it's hard to tell that on most maps (possibly because of the projection method used, possibly because it's right next to the much larger state of Texas).

The further details of New Mexico's demographics are described below, but suffice to say it is one of the most ethnically diverse states in the United States. The Native American tribes of New Mexico are the Pueblo, Apache, and Navajo; they comprise a large potion of the state's population, with much of the state's northwestern quadrant being composed of native reservations. The Pueblo are the direct descendants of the Ancestral Puebloans, a.k.a. the Anasazi.note "Anasazi" is a Navajo word meaning "Ancient Enemy". The modern Pueblo prefer that it not be used, either in reference to themselves or to their ancestors. The Spanish were the first Europeans to arrive in the area naming the colony Santa Fe de Nuevo México (Holy Faith of New Mexico) in the 1500s as they believed the Pueblos to be related to the Aztecs (Mexica),note Ironically, the indigenous peoples of what is now New Mexico do not appear to have any substantial historical relation to the Mexica, except for some probable trading relations. However, many of the peoples of what is now Arizona and Utah, particularly the Hopi, Paiute, and Shoshone, speak Uto-Aztecan languages related to the Nahuatl tongue of the Aztecs. As these lands were part of Spanish New Mexico, the designation is actually not that far off. because their settled agricultural society and towns somewhat resembled the urbanized Valley of Mexiconote The region currently occupied by Mexico City and the eastern part of the State of Mexico (albeit on a smaller scale). The region became part of newly independent Mexico in 1820 and remained part of that country for about 30 years until it was handed to the United States at the conclusion of the Mexican-American War.

The territory was the only member of the Union in the American South during the American Civil War, and defeated Confederate Texas twice as they attempted to annex the Territory of New Mexico, during the Battle of Albuquerque and the Battle of Glorieta. New Mexico gained statehood in 1912. The descendants of Spanish settlers continue to live in the area, as well as West Texas and Southern Colorado; they are called Hispanos or Nuevomexicanos. This ethnic diversity has contributed to making New Mexico a fairly dependable base for the Democratic Party in a typically conservative part of the country, though the conditions on the reservations have given the state one of the higher poverty rates in the nation.

New Mexico is the birthplace of Neil Patrick Harris, The Incredible Hulk, William Hanna of Hanna-Barbera, the Apache chief Geronimo, and numerous others. Though the state has a diverse amount of cuisines represented and music groups from across numerous genres, there is a regional New Mexican cuisine and a local genre of music called New Mexico Music.

The New Mexico culture is basically equal parts Native American and Spanish at its roots, interpreted by the people of the Mexican frontier and American West. This is reflected in the distinctive indigenous artworks of New Mexico, for example the New Mexico music genre combines the Native American and Hispano folk music with American and Mexican popular music styles including jazz, bandera, pop, latin music, surf rock, ranchera, country, and western.

New Mexico's unique culinary style mainly centers around the New Mexico chile pepper, which comes in either red or green. The peppers are green, and eventually they ripen to red. The green peppers are usually served chopped or in a sauce; whereas the red peppers are dried, and then served rehydrated in the form of a sauce. They can be ordered separately, or together in a combination called "Christmas". The current New Mexico chile pepper combined numerous New Mexican peppers from various Pueblos and towns, it was headed by Dr. Fabian Garcia and New Mexico State University. A Native American frybread called Sopapillas are common, which can also be served as a dessert with honey. Other breads in the area include New Mexico style tortillas (either flour or corn, and uniquely blue corn), brioche buns, and bolillo (a french bread made from whole wheat, wheat germ, and/or flax). Common sides are calabacitas (a sauteed squash dish), papitas (fried diced potatos), beans (pinto or anasazi), and rice (Spanish or Mexican). Snacks in the area include bizcochitos/biscochitosnote The former is "proper" Spanish spelling, the latter is common in New Mexico because the Spanish arrived in New Mexico so long ago, Spanish spelling had not yet been standardized. This is also seen with other New Mexican culinary and cultural items, e.g. pozole

, a post-Columbian Mesoamerican soup/stew of meat and hominy, which is also traditional in New Mexico and spelled "posole" there. (a sugary anise-cinnamon butter cookie that couldn't be more Spanish if it danced a flamenco at you) and piñon (pine nuts from indigenous pines, which have a hard hull and are eaten like sunflower seedsnote They can be shelled and used like Mediterranean stone pine or Asian Korean pine nuts, but usually aren't.).

The culture and environment of New Mexico has proven to be quite suited for science and technology, ever since the Manhattan Project was stationed in Los Alamos, the state has continued to foster scientific progress. Microsoft maintains a sign at the location of their first office in Albuquerque thanking the city for fostering "an environment that stimulated creativity and encouraged entrepreneurial spirit." Intel, Google, NASA, and numerous other technology firms maintain a presence in the state. The VLA (Very large Array) is a network of radio antenna dishes west of Socorro that studies the universe, and nearby Spaceport America is the United States' premiere commercial spaceport.

New Mexico also has a footnote in the history of the telephone in the US. Its original area code of 505 was split in October 2007, with the 505 zone shrinking to the areas around Albuquerque, Santa Fe, and the Navajo Nation and the rest of the state adopting 575. This was the last time a US area code has been split. All US area codes introduced since then have been part of overlay plans, in which an extra area code is added to the same geographic area as an existing code.

Hispanic of any race are 46.3% (the largest proportion of any state), non-Hispanic white are 40.5%, Native Americans are 9.4% (the third-highest behind only Alaska and Oklahoma), African-Americans are 2.1%, and Asian-Americans 1.4%. 15% list "other" as their race, and numerous other races and ethnicities are represented throughout the state.

The indigenous people of New Mexico are those who were in the Nuevo Mexico prior to the Mexican and American territorial eras. The Native Americans of the 19 Pueblo groups, the two Apache groups, and the eastern Navajo Nation, as well as the descendants of the original Hispano colonists. These groups still make up the majority population of the area.

During the 1920s-1950s, newly arriving White Americans, were very hostile towards the indigenous Native American and Spanish peoples of New Mexico. Segregation was prominent in downtown areas throughout New Mexico, however Old Town areas and small towns continued to be integrated with prior Anglo/Afro/Asian arrivals of the 1800s American frontier and the Native American/Hispano peoples. Multi-generational white New Mexicans were often at odds against new White arrivals, as most native white New Mexicans were friends, and sometimes family (through marriages), with other fellow born-and-raised New Mexicans of other racial groups. Not all new White arrivals were hostile to native New Mexicans, in fact, one great exception was Clyde and Carrie Tingley, he and his wife helped grow Albuquerque and New Mexico during the Great Depression. Tourists since the 1930s often wanted to see "authentic" New Mexican and Southwestern culture, these tourists helped to grow the native populations into prominence. And, after the civil rights movement in the 1960s, most new arrivals into New Mexico have helped foster the growth of New Mexico and celebrate their shared New Mexican culture.

The African-American history of New Mexico goes as far back as Moorish, Afro-Spaniard, and Mulatto settlers that arrived even during the earliest days of New Mexico, and even much later during the American frontier days as the Buffalo soldiers were stationed New Mexico they even settled into ranches throughout Northern New Mexico. These people often adopted the common New Mexican culture, that of the Native Americans and the Nuevomexicanos, as they were welcoming and non-confrontational to people of African origin. The traditional New Mexican horno oven, used by the Native Americans and Hispano Nuevomexicanos, is believed to have originated from the Spanish Moorish peoples.

Another unique aspect of New Mexico is its Japanese heritage. The earliest Japanese immigrants into New Mexico were the railroad workers, in fact, prior to statehood, during the 1910 census, their were several permanent Japanese families. Two of the families, Tashiro and Nakayama, became very prominent in New Mexico for the work in helping to preserve New Mexican crops. Roy Nakayama worked with Fabian Garcia at New Mexico State University to develop various sub-cultivars of New Mexico chile pepper, including the popular Big Jim pepper. During World War II, the majority of Japanese New Mexicans were opposed to internment camps, Albuquerque so vehemently opposed their internment that the issue was never even brought to vote. The few interment camps across the state housed Japanese-Americans from other states, built by the federal government outside of city limits, and New Mexican citizens were not allowed to visit the camps unless they are military personnel stationed at said camp. Clovis was the only New Mexican town that voted to intern their Japanese citizens, due to the heavy Texan influence which was very pro-internment. After the war, due to New Mexico's majority pro-Japanese sentiment, the New Mexico Chapter of the JACL began, and the Albuquerque Nisei Club was formed to foster the Japanese community of the state. Albuquerque is home to the Sasebo Japanese Garden, at the Albuquerque Bio Park Botanic Garden, designed by Toru Tanaka (a landscape artist that has worked on numerous Japanese gardens throughout Japan and the US). Santa Fe contains one the United States' few Japanese-style bath-houses at the Ten Thousand Waves Spa, which has a unique blend of traditional Japanese and New Mexican architecture.

Nope, different place. In the 1500s, New Mexico was originally given its name, Nuevo México, due to the Spanish misinterpreting the Pueblo natives as being related to the Mexica (Aztecs). Mexico got its name much later, in the 1800s, to express a sense of pride for the Aztec empire. If New Mexico was still a part of Mexico, it would still be a state, just in another country, and it would probably still be called Nuevo México.The New Mexican flag 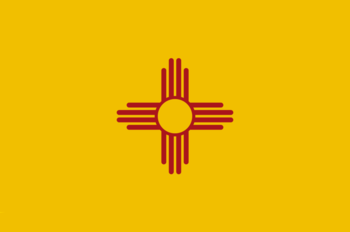 A Zia Pueblo sun symbol in red on a field of yellow, the colors represent the colors of the Spanish flag.