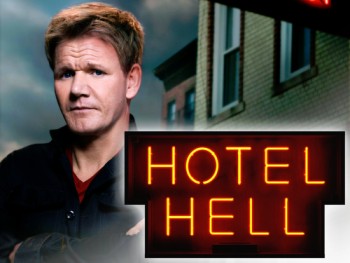 Hotel, Hotel Hell
If you think the beer is rotten
You should see the clientele
Advertisement:

An American reality television show that first aired on FOX on August 13, 2012. Following a format similar to Kitchen Nightmares, the show follows Gordon Ramsay as he visits hotels in dire need of assistance.

If you're looking for terrible or scary hotels in general, that's Hell Hotel. Not to be confused with the haunted house from Universal Studios' 1997 Halloween Horror Nights.