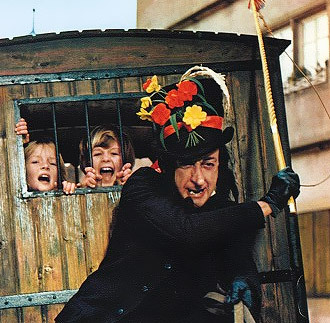 Off to the butcher shop we go!
"They're all mistakes, children! Filthy, nasty things. Glad I never was one."
— Agatha Trunchbull, Matilda
Advertisement:

Classic villain type in children's stories and films, a person who cannot stand children. At all. It may range from them being very irritated by them but not saying anything to seething hatred of insane comedic levels, but whatever the case, they simply do not like them.

A Child Hater can be either gender, and often either a glamorous woman with a shallow personality, or a bitter, cantankerous old man. The fact that they themselves were once a child never seems entirely relevant to them, though, in a few cases, said child hater may have had a difficult childhood filled with trying to deal with other, less than kind children, or may have become embittered by an early adulthood of dealing with kids at their worst. Ironically, for some reason they have a tendency to have a career that involves working with children, such as a camp counselor or a Sadist Teacher. They may be in a job that focuses on children (teacher, host of a children's TV show, toymaker), or as a particular type of Depraved Kids' Show Host. Otherwise, they're likely to become a Cranky Neighbor who confiscates any toy or other plaything of theirs that lands on their property.

If one of these is trying to marry a single parent, expect the Child Hater to make plans to ship the poor kid or kids Off to Boarding School so they can have the parent all to themselves. The Child Hater usually doesn't have any children of their own, but if they do, expect them to either be a Resentful Guardian or an Abusive Parent.

Another variant is a teenager or young adult who hates anyone more than a few years younger than them, generally for presumed immaturity—which ironically tends to make them come off as very childish themselves.

Needless to say, it's highly probable that such a character Would Hurt a Child, but it isn't obligatory. In extreme cases, they may even aim for a full-on Childless Dystopia.

In Real Life, this is known as misopedia

See also Teen Hater for the adolescent-themed Sub-Trope. Compare Children Are a Waste. Contrast Friend to All Children, who is often the natural enemy of this kind of villain. Also contrast the Adult Hater, who is equally bitter but towards everyone except other children.

It should be noted that some people in real life dislike children, but more information is not necessary.

He does point out, though, that AIDS beats out children because you can't go to prison for accidentally dropping AIDS.