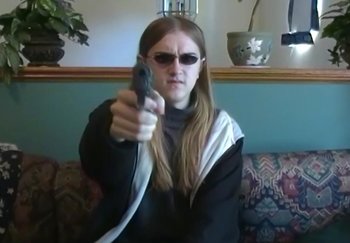 "We watch crap movies, we play crap games.
There's too much out there, causing us pain.
The actors are rancid. The plot is stale.
Necro is here to put an end to the fail.
The Necro Critic is in!"
— The Necro Critic's theme song
Advertisement:

What sets him apart from other internet reviewers is his lack of a specialty. While other reviewers tend to have a specific focus, like certain movie genres or retro video games, Necro is more of a Jack-of-All-Trades critic, talking about movies, video games, anime, and even the occasional Top Ten List. His style is also much more down-to-earth and logistical than others, allowing him to defend his opinions in a much more calm and relaxed manner. At least until something pushes him past his breaking point…

While he doesn't have many episodes, nor is he as popular as other more famous reviewers, he has a very dedicated cult fanbase.

Necro goes to extreme measures to get rid of the DVD for Van Helsing: The London Assignment.

Necro goes to extreme measures to get rid of the DVD for Van Helsing: The London Assignment.