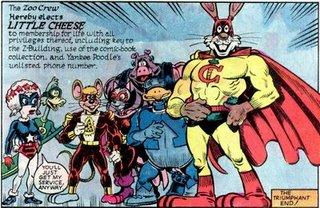 Captain Carrot and His Amazing Zoo Crew! is a team of Superhero Funny Animal characters owned by DC Comics. They were first published in their own comic book series in the early 1980's, though it didn't last very long. Created by writer Roy Thomas and artist Scott Shaw, this was the first team of Funny Animal characters to be specifically recognized as being part of the DC Universe.

In their origin story, it was explained that fragments from a strange meteor (which had been shattered by Superman before it could hit Earth) were somehow transported to the Alternate Universe called Earth-C, which was inhabited by Humanoid Animals instead of humans (specifically, it's the setting of all the Funny Animal comics DC published back in the Golden Age). The fragments gave superpowers to various animals, who decided to join together and form their own superhero team, the Zoo Crew. They are:

As you can see, despite supposedly being as "real" as the rest of the DC universe, Earth-C (and the series) was full of the kind of puns you see in cartoons. This is never explained beyond a "what seems funny to us make sense to them" attitude. (Lampshaded when Changeling of the Teen Titans visits Earth-C and asks the Crew about why their cities have such "silly names") note It turns out they think our city names sound equally silly. "I'll bet in Washington they've always got a ton of washing to do!").

The Zoo Crew battled both their own villains and ones from the main DC Universe (Starro, the Starfish Conqueror, an old Justice League alien enemy, in their first issue; Gorilla Grodd in their last.) They also met the "Just'a Lotta Animals" ("JLA") a team of heroes from the similar "Earth C-minus" whose heroes were Expies of DC's main heroes.

After the series was canceled, the characters reappeared in, of all places, "The Oz / Wonderland War" miniseries, which was Exactly What It Says on the Tin. Decades later in the 2000s, they reappeared in an issue of Teen Titans (as part of a comic book Eddie Bloomberg/Kid Devil was reading) in a story that parodied the "Dark Age" style of modern comics: The team had disbanded after Little Cheese's death, whose murderer (seemingly) turned out to be Alley-Kat-Abra! This was followed by a 2007 miniseries, Captain Carrot and the Final Ark, where the team was reunited and Abra was cleared of the murder (it was her Evil Twin). They were joined by a new member, the non-powered crimefighter American Eagle, secretly right-wing talk show host Johnny Jingo. However, Earth-C was flooded as a result of a war between aquatic and non-aquatic animals, and the heroes had to evacuate it on a "Space Ark." They ended up on the main Earth of The Multiverse, but found themselves changed into normal animals while there. However, they were changed back to their true forms in the last issue of the Final Crisis Crisis Crossover.

Captain Carrot has now reappeared in the pages of The Multiversity, while both he and Fastback are significant characters in several tie-ins of Convergence. Captain Carrot later went on to join the Justice League Incarnate.

Fans of Terry Pratchett will have realised by now that this Captain Carrot has nothing whatsoever to do with the Discworld.