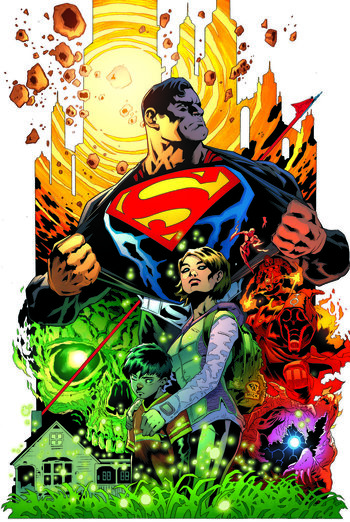 The Super-Family.
Your parents here on Earth did the best they could, but they didn't understand what it was like for a boy on his way to being a teenager and dealing with...superpowers. With us, Jon's literally got the best of both worlds to help make sense of it all.
— Lois Smith
Advertisement:

A relaunch as part of DC Rebirth. At the end of The Final Days of Superman, the New 52 Superman died. Luckily, however, there was another Superman already on Earth: the pre-Flashpoint Superman, who had been living secretly on Earth for the past nine years with his wife, Lois, and their half-Kryptonian son, Jon, as detailed in Superman: Lois and Clark.

The fourth volume of Superman was launched with a Rebirth issue that saw the older Superman bury the New 52 Superman and swear to uphold his legacy. While in Action Comics, Superman battled a newly revived Doomsday, however, the Superman book takes a look at the relationship between him and his son, Jonathan, as well as Lois, as they live their lives in secret on a small farm on the outskirts of Metropolis.

The first storyline, "The Son of Superman," deals with Jon's burgeoning powers and the return of the Eradicator. The story later crossed over with Action Comics for Superman Reborn, a story that addressed both the pre-Flashpoint and New 52 Supermen's statuses.

Superman's "Rebirth" ended in May 2018, with Brian Michael Bendis —fresh off his decades-long stint at Marvel— taking over writing duties on both Action Comics (retaining its numbering after issue #1000) and the main Superman title, relaunching with a new #1 and Ivan Reis on art.

Tropes included in the fourth volume of Superman: