Town with a Dark Secret 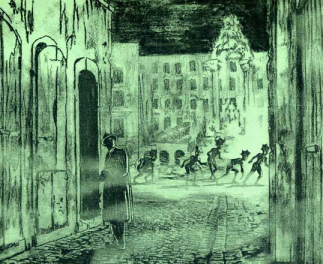 Something fishy going on...
Image by Neko Pilarcik-Tellez

Everybody in a small town is in on a secret. A terrible secret that nobody outside the town must know. The visiting protagonist slowly begins to suspect that something is wrong.

Such towns are often located in Lovecraft Country. If the terrible secret is covered up with a sweet veneer, see Stepford Suburbia and Uncanny Village. If it's big enough — say, a country or more — then you have yourself an Empire with a Dark Secret. Also note that the secret doesn't have to be supernatural; it can be something as mundane as a murder coverup.

A Wrong Genre Savvy character may take it for a Close-Knit Community, or vice versa, while a Subverted Sitcom set in a small town might do the same for the audience. Sister Trope of Small Town, Big Hell, which is this trope but Played for Drama instead of for Horror.

As can be expected from a trope like this, spoilers may be unmarked. (And that is far more warning than most visitors to these towns get.)