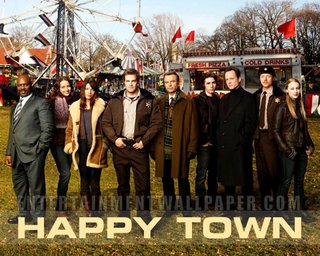 Happy Town is an ABC television series that aired in the spring of 2010, and was canceled after only one season.

Underneath the surface of Haplin, Minnesota — nicknamed "Happy Town" (and which is in Haplin County) — is a dark secret involving the "Magic Man" (so-called because of his ability to make people just vanish into thin air), who had a reign of terror in Haplin seven years in the past. After a murder in town, it begins to look as though the Magic Man has come back... Among those who want to solve the mystery of both the murder and the Magic Man are Tommy Conroy (Geoff Stults), the son of the town sheriff, and Henley Boone (Lauren German), a seeming newcomer to Haplin County, who has secrets of her own... secrets that connect her to the already-existing secrets of Happy Town...