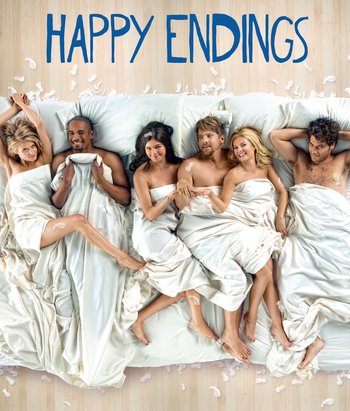 Fun night stand.
Jane: Sweetie! You and Alex are going to work this out! This is just the sad chapter in your epic love story!
Max: Ah, this is a classic story of boy meets girl, boy loses girl to guy on rollerblades, boy becomes biggest YouTube sensation since "kitten stuck in tuba."
Advertisement:

A 2011–13 ABC Sitcom which followed a group of six friends: a former couple, Alex and Dave; Alex's sister Jane, and her other half Brad; their chronically single friend, Penny; and her gay ex-boyfriend and Brad's BFF, Max. The series begins when Alex leaves Dave at the altar. This completely traumatizes Dave, and leaves their friends lamenting how they will probably end up torn apart by the fallout and rarely see each other again.

When Alex returns from the honeymoon that she and Dave planned, Dave is understandably ticked off, and now the friends have a problem: having to either disband or pick sides between Dave and Alex. Fortunately, Alex and Dave decide that what happened was for the best and that they have to find a way to be friends with each other in order not to lose their other friends. However many complications remain down the road for this group of friends. And Hilarity Ensues.

The show ran for three seasons before getting cancelled after ABC made a monumental screw-up of scheduling and airing the show, adding it to the pile of perfectly successful shows inadvertantly killed by Executive Meddling.