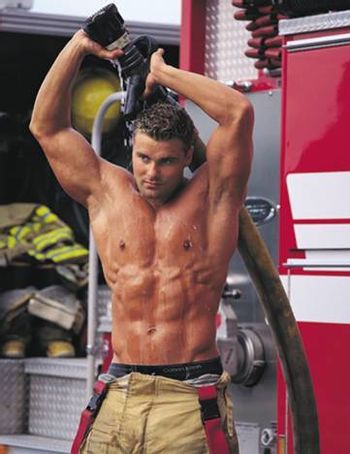 Real Life's Mr. Fanservice.
"Firemen are cute! Even when they're not cute… they're still cute!"
— Sex and the City
Advertisement:

Attractive male firefighters. Why, of all men, firefighters? Perhaps it's their occupational necessity to keep in prime physical condition, coupled with their tendency to heroically rescue people from burning buildings. Either way, this trope is prime Mr. Fanservice, and one that is prone to heavy Lampshade Hanging, such as male strippers dressing as firefighters, or women in comedies rescued by firemen who happen to all be strapping studs.

For some reason, the potential implications of a bunch of beefy men spending lots of time together in a building with lots of beds and few women around never seems to enter into this trope. Or maybe it does.

Cousin to the Fair Cop, Good-Looking Privates, and Hot Men at Work.

Note: This is NOT about people who have fire-based powers. That is Playing with Fire.

The moment hunky firemen were invented.

The moment hunky firemen were invented.