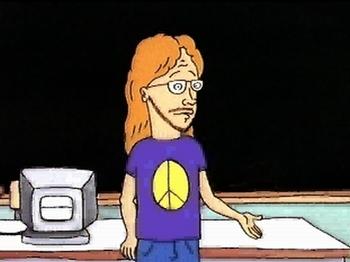 Let's get in touch with our inner-granola, m'kay?
"Did I ever tell you kids about the sixties?"
— Unnamed teacher, The Simpsons
Advertisement:

The Hippie Teacher eschews traditional academic discipline with a more laid back, free spirit, peace, love and grooviness to their curriculum. May or may not be a good teacher, but rarely a good disciplinarian. Often let students call them by their first name "Mr. Hippie is my father; you can call me Rod," and a strange incense can be smelled from their office.

Definitely Truth in Television; while they can be in different areas of the school they tend to be in liberal arts, guidance counselors or other "soft" or "creative" subjects. Hard sciences are less common, unless crossed with Absent-Minded Professor. When portrayed sympathetically, this character is usually a Cool Teacher who is passionate about their students and finds alternative ways to influence the Book Dumb. If portrayed unsympathetically, they're either incompetent pushovers who are trying to slide by with minimal effort and hand out A's like candy, or sees their students as an entire generation they can program their own counter-culture / anti-authority ideals on.

May overlap with a Sadist Teacher, but more likely to be seen as harmless or a positive influence. Compare Misplaced Kindergarten Teacher and Psychologist Teacher, Hippie Parents for the parent variant, and Loony Librarian.