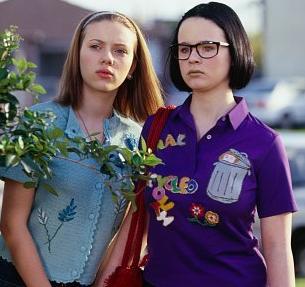 Not Daria and Jane, honest.
Advertisement:

Ghost World is a 2001 indie film, directed by Terry Zwigoff, adapted from the comic series of the same name. It follows Deadpan Snarkers Enid Coleslaw (Thora Birch) and Rebecca Doppelmeyer (Scarlett Johansson) as they face the summer after high school graduation.

Seymour, a lonely and cynical middle-aged man played by Steve Buscemi, is a central character in the film, yet the characters from the comic of which he is an amalgam are only very fleeting presences.

Enid and Rebecca's conversations would not be out of place in a Daria episode, though they lack the moral core which would make them that kind of Deadpan Snarker.

Not to be confused with the tropes Ghost Planet, Ghost Town or Ghost City.