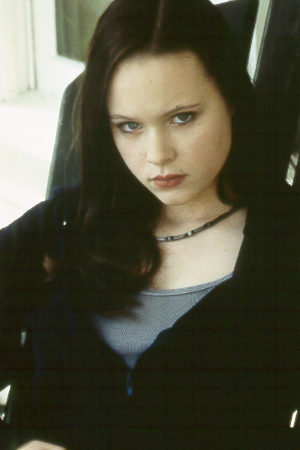 Thora Birch does not think very highly of you.
"When you're making a film, you become incredibly close. It's not like you're filing away papers all day. You're creating with human emotions, so you do become very connected, so it is familial and romantic."
Advertisement:

Thora Birch (born March 11, 1982 in Los Angeles, California) is an American actress. Named after the Norse god of thunder, she began her career as a child star in the films Purple People Eater, Patriot Games, All I Want For Christmas and most memorably as Dani in Hocus Pocus. She also had significant roles in the films Alaska and Now and Then.

At the age of sixteen, Thora sought to pursue more adult roles, and got her wish with American Beauty. The film's portrayal of a dysfunctional family in a seemingly perfect suburb earned critical acclaim, and provoked lots of hype surrounding the younger actors. Thora even received a significant seven figure salary for her part in the British thriller The Hole. She also received a Golden Globe nomination for Ghost World. She seemed poised to become a star...

...Until the reported antics

of her father/manager began to cost her roles. Despite her talent and directors being keen to work with her, she gradually disappeared from the mainstream roles. Occasionally she surfaced in an independent film or voice acting role - before taking a hiatus from acting in 2012. But 2017 saw her returning with a role in the sci-fi series Colony, and the film The Etruscan Smile. Could Career Resurrection be in the cards?