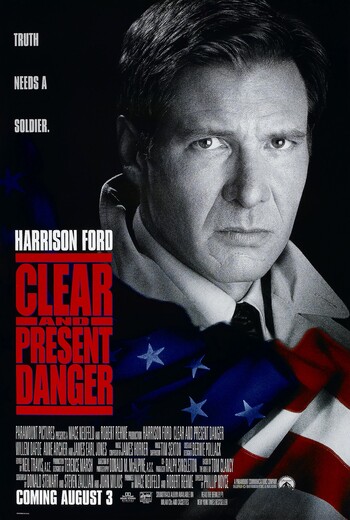 Clear and Present Danger is a 1994 film starring Harrison Ford, Willem Dafoe, Joaquim De Almeida, Raymond Cruz, and Benjamin Bratt, adapted from the novel of the same name. It is the third and final film in the Jack Ryan trilogy (the first two being The Hunt for Red October and Patriot Games in 1990 and 1992, respectively; The Sum of All Fears in 2002 was a reboot of the franchise).

Jack Ryan (Ford), now Acting CIA Deputy Director of Intelligence following Admiral James Greer (James Earl Jones) being diagnosed with terminal cancer, must investigate the murder of a life-long friend of the POTUS in relation to what appears to be a drug cartel in Colombia, only to be pulled into a war illegally started by the US government.

"I will not let you dishonor their memories by pretending you had nothing to do with it!"