Film / The Hunt for Red October 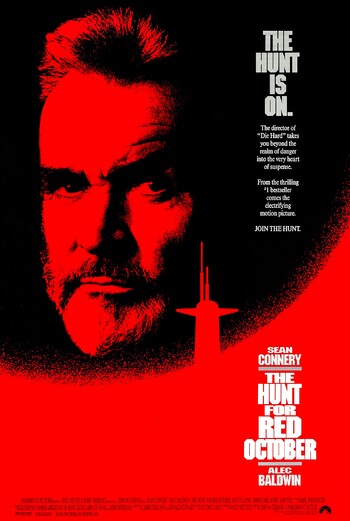 "Verify our range to target. One ping only."
"In November of 1984, shortly before Gorbachev came to power, a Typhoon-class Soviet sub surfaced just south of the Grand Banks.
It then sank in deep water, apparently suffering a radiation problem. Unconfirmed reports indicated some of the crew were rescued.
But according to repeated statements by both Soviet and American governments,
nothing of what you are about to see... ever happened."
— Text sketch over the opening scene
Advertisement:

The Hunt for Red October is a 1990 film adaptation of the Tom Clancy novel of the same name, directed by John McTiernan. It stars Sean Connery, playing the Lithuanian captain Marko Ramius, and Alec Baldwin, playing Jack Ryan. It is the first film in the original Jack Ryan film trilogy (the second of which is 1992's Patriot Games, and the third is 1994's Clear and Present Danger). Basil Poledouris composed the soundtrack.

It's a Cold War tale of the fictional "Typhoon" class missile submarine Krasniy Oktyabr ("Red October"). The sub has an experimental magnetohydrodynamic propulsion system (more easily referred to as Caterpillar Drive), which allows it to run more quietly than any other ship at sea; effectively making it nigh-invisible to (passive) SONAR detection. On its first deployment, Captain Marko Ramius murders his political officer, taking his set of keys for the October's nuclear missiles. Conspiring with his senior officers, Ramius notifies his crew that they will be testing the ship by evading both the U.S. and Soviet navies to reach the eastern coast of the United States itself...

Not desiring to lose their sub or the secret of the Caterpillar Drive, the Soviets send their surface and attack-sub fleets after it, an amount of activity that's suspicious to the other side.

The Americans must find the sub before it is destroyed, assuming that CIA analyst Jack Ryan is right that the officers plan to defect — as opposed to just unilaterally launching their missiles...

The Typhoon-class submarine is real, and the largest submarine in the world. The submarine in the story, though, is quite considerably different to its real-life counterpart, to the point where they can't really be considered the same vessel, mainly because of its fictional "silent" propulsion system and due to a lot of details of the Typhoons having been classified at the time. On the other hand, the film maintains Plausible Deniability by specifically stating it to be a prototype variant of its class, and at least alludes to future Soviet political instability as a good reason why they never got around to producing more.

It's time to trope The Hunt for Red October, Tovarishch Kapitan: