Literature / The Hunt for Red October 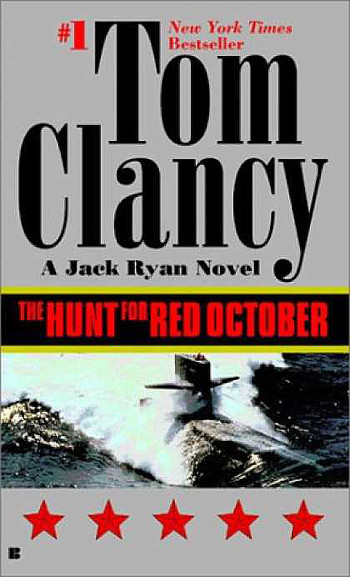 The first and most famous novel by Tom Clancy, first published in 1984. It is the fourth novel to take place chronologically in the Ryanverse, and the first piece of fiction ever published by the Naval Institute Press.
Advertisement:

It's a Cold War tale of the fictional "Typhoon" class missile submarine Красный Октябрь ("Red October"). The sub has an experimental ducted tunnel drive, which allows it to run more quietly than any other ship at sea; effectively making it nigh-invisible to sonar detection. On its first deployment, Captain Marko Ramius murders his political officer, taking his set of keys for the October's nuclear missiles. Conspiring with his senior officers, Ramius notifies his crew that they will be testing the ship by evading both the U.S. and Soviet navies to reach the eastern coast of the United States itself…

Not desiring to lose their sub or the secret of the "caterpillar drive", the Soviets send their surface and attack-sub fleets after it, an amount of activity that's suspicious to the other side.

The Americans must find the sub before it is destroyed, assuming that CIA analyst Jack Ryan is right that the officers plan to defect — as opposed to just unilaterally launching their missiles…

The Typhoon-class submarine is real, and the largest submarine in the world. The submarine in the story, though, is quite considerably different to its real-life counterpart, to the point where they can't really be considered the same vessel, mainly because of its fictional "silent" propulsion system and due to a lot of details of the Typhoons having been classified at the time.