Heal It with Booze 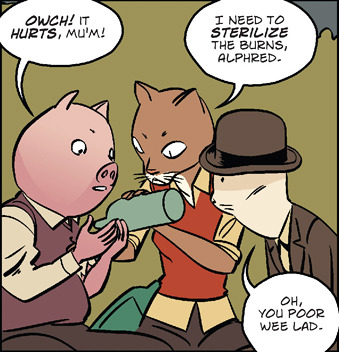 In fiction, no one ever has TCP antiseptic... but everyone has vodka. This trope occurs when a character pours liquor on a wound to disinfect it, or drinks alcohol as an anesthetic. Note that in the latter case this trope would only occur when the character is using alcohol specifically as a painkiller right before having a wound stitched up or a bullet extracted etc, and not when a character is just generally self-medicating with alcohol.

In Self-Surgery situations, booze can do double duty as anesthetic for the pain and Liquid Courage for the squeamishness.

Using the alcohol as an antiseptic can be an example of Worst Aid, depending on the alcohol. You need as clean an alcohol as possible for that. If you're using brown liquor or, worse, wine, then you're introducing a lot of sugar and virtually guaranteeing a nasty infection.

Not to be confused with Booze-Based Buff, where the alcohol grants abilities and is basically a power up. If the alcohol instantly remedies a characters ailments, it's more Health Food than this trope. Sub-trope of Bizarre Beverage Use.

In the mortal realm, alcohol slowly kills you. In the City of the Damned, they actually improve your health.

In the mortal realm, alcohol slowly kills you. In the City of the Damned, they actually improve your health.