Do a Barrel Roll 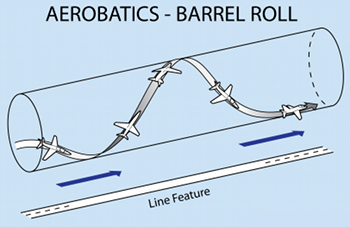 So, you have this Cool Ship, Cool Plane, Cool Whatever. Now, what to do with it? Sure, you can show it off and see how everyone turns green with envy, but the kind of stories frequented by Cool Means Of Travel usually request you to use it a bit more actively. Like, engage in fighting and stuff. At times, it's awesome enough when you open fire. At others... Not so much. So, what should you do to meet the expectations of the audience?

Do a Cool Maneuver.

The barrel roll itself is regularly confused with an aileron roll.note An actual barrel roll is shown in the trope image, whereas an aileron roll describes an aircraft doing one full rotation on its roll axis (Z-axis from the vehicle's perspective).

Compare Spectacular Spinning. When it includes tricking the opponent by use of terrain or rapid braking, it's Wronski Feint or Dodge by Braking. If missiles are involved, it's often a High-Speed Missile Dodge. Finally, if you're into suicidal attacks, then remember Ramming Always Works.

You may also be looking for Spin to Deflect Stuff, or Sphere Factor for when you are on the barrel.