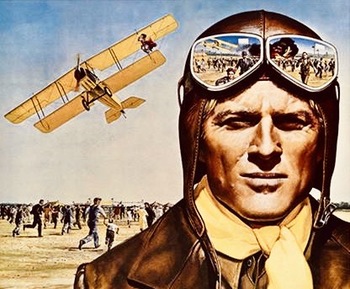 The Great Waldo Pepper is a 1975 film directed by George Roy Hill and starring Robert Redford in the title role. Also in the cast are Bo Svenson, Susan Sarandon, Margot Kidder, Geoffrey Lewis, and Edward Herrmann.

In the 1920s, Waldo Pepper is a down-on-his luck former World War I pilot who gets by on making barnstorming appearances, giving rides and doing stunts... all of which are getting harder to hold the public's attention with, as airplanes are becoming more common.

Waldo also feels cheated by the fact that he was never able to fly against the greatest of the German aces, Ernst Kessler. When a series of disastrous mishaps derails his life, it puts him in a place to not only meet the famed ace, but test his flying skills.