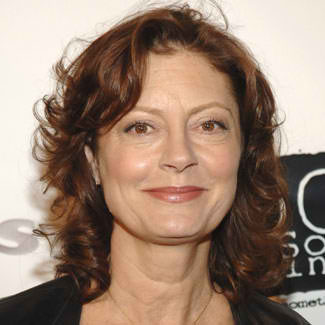 "When you start to develop your powers of empathy and imagination, the whole world opens up to you."
Advertisement:

Sarandon began her career in the film Joe (1970) and appeared in the soap opera A World Apart from 1970 to 1971. She has received five Academy Award nominations for Best Actress, for Atlantic City, Thelma & Louise, Lorenzo's Oil, The Client and Dead Man Walking for which she finally won. On television, she has received five Emmy nominations, including for Bernard & Doris and You Dont Know Jack. Her other films include The Great Waldo Pepper, The Rocky Horror Picture Show, Pretty Baby, The Hunger, The Witches of Eastwick, Bull Durham, Light Sleeper, Little Women (1994), Stepmom, Igby Goes Down, Enchanted, The Lovely Bones, Arbitrage, and 3 Generations.

She is also known for her social and political activism for a variety of progressive causes. She was appointed a UNICEF Goodwill Ambassador in 1999 and received the Action Against Hunger Humanitarian Award in 2006.